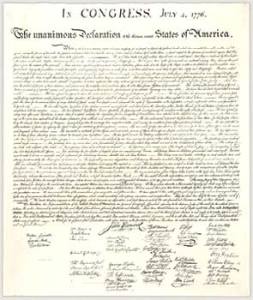 Historical documents are best interpreted from two points of view – first through the eyes of the original target audience and secondly though a contemporary lens. As part of July 4th celebrations each year, American newspapers regularly publish the entire 8 paragraph, 1137 words of the Declaration of Independence.   Most readers do not carefully read the facsimile copy and pause to think about its messages to either audience.

In 1776, most residents in the rebellious 13 colonies believed that the English Parliament was to blame for their perceived ill treatment. They blamed the British Parliament for a litany of unbearable legislation – the Stamp Act, the Quartering Act, and the Intolerable Act closing the Port of Boston, which so incensed the colonists. King George III’s role in the disputes with North America was minimized and most colonists remained loyal to the King but greatly infuriated at Parliament.

Stating the case to sever loyalty to the King, the Declaration of Independence adopted by the Continental Congress dramatically changed this positive view of the King. It enumerated the colonists’ complaints and associated them with the King and not Parliament. In fact there is only one reference in the Declaration to a legislature and no use of the word Parliament. The Declaration clearly stated the case to dissolve fealty ties with the King and to end his perceived ultimate authority over the colonists.

Today, cursory readers of the Declaration focus on the lofty rhetoric that “all men are created equal” or the “right to life, liberty and the pursuit of happiness.” Usually the Declaration’s long list of grievances is reduced to the simplistic dispute over the power to tax the colonies. However, other enumerated grievances have important, discerning meanings today and speak to current political issues.

An example of an itemized cause for the severing of political ties with Britain was that “He (the King) has endeavored to prevent the population of these States; for that purpose obstructing the Laws of Naturalization for foreigners; refusing to pass others to encourage their migrations hither….” This complaint is highly relevant today as many in the US today are seeking to restrict entry of new immigrants. Opponents of the current Immigration Reform Bill are likely not cognizant of the inconsistency of their views with the Declaration of Independence.

Another complaint was that the King “has endeavored to bring on the inhabitants of our frontiers, the merciless Indian Savages, whose known rule of warfare, is an undistinguished destruction of all ages, sexes and conditions.” A neutral contemporary observer would have observed that Native Americans could have leveled this same charge. For in fact, both sides engaged in brutal conflicts of total destruction with severe injury to non-combatants.   Further the colonists were expropriating Native American land and exterminating their populations. Today, this colonialist complaint is viewed as a stain upon our founding ethos and colonial actions to regret.

Lastly, today we believe that separation of Church and State is one of the bedrocks of our American form of government and society. However, one of the complaints against the King was “for abolishing the free English Laws in a neighboring Province”. This provision refers to the Quebec Act that supported a Francophile culture and freedom to practice their Catholicism. It is curious that the Declaration of Independence contains this grievance as Quebec was not a signatory or supporter.   One can only interpret this provision in the Declaration as a colonialist complaint against the King for allowing the open practice of Catholicism in a neighboring province. Today, we view this as a preemption of people’s rights to their own religious beliefs without interference of the government.

The Declaration of Independence was originally written to state the case for permanently severing the last remaining colonial ties with Britain by eliminating allegiance to the Crown. It was a hugely successful in effecting this change in revolutionary era public opinion. As importantly it’s messages continue to be instructive on contemporary issues like immigration and treatment of people who wish to become citizens. The Declaration also provides a more discerning understanding of our history with Native Americans and perceived ultimate authority of the state to regulate or proscribe political and religious freedoms. It is useful for us all to discerningly re-read this ever-meaningful statement of political grievances and call to action.