On a stormy eve before a planned mountain climb, the weather report was promising – fair and sunny with little chance of rain.  The climbing reviews advised spectacular views from the summit of Wheeler Peak, the tallest mountain in New Mexico.  We anticipated clear, 360 degree views of the other peaks of the Sangre De Cristo Mountains and the remarkable tectonic chasm of the Rio Grande River Gorge.  The hard-earned vistas were expected to be awesome!

As with any mountain assent, we started early.  Much to our dismay, clouds and fog still enshrouded the mountain.  The rechecked forecasts continued to indicate sunny, warm conditions, so we proceeded up the trail. After a few miles, there were hints of wind gusts gathering among the treetops.  As the lush, damp forrest thinned and we reached the tree line, clouds continued to obscur the sky.  However, confident in the forecast and in our extra layers of clothing, we continued up the mountain. 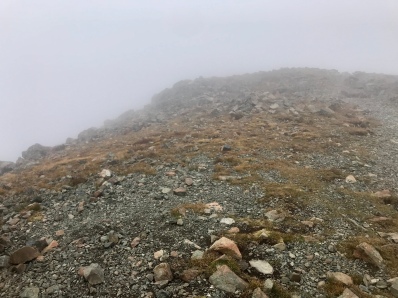 Traversing a steep, glaciated slope, the clouds did not thin, but the winds began to blow constantly.  Approaching the summit ridge, visibility  dropped dramatically and the winds intensified.  The weather was not changing as expected! Hindering the last quarter mile to the summit, forty mile-per-hour gusts necessitated careful balance and limited visibility required sure-footed traction.  Atop the summit, only whiteness above and below.  None of the anticipated vistas were in sight.

There is a tendency to think that the enormous expenditure of energy to climb this  thirteen thousand foot peak was a waste. However, beauty comes in many forms. The multi-colored rocks, lichen, and alpine grasses provided a captivating path through a wondrous fog created tunnel up to the summit. Truly spectacular, this unexpected encounter offered a magical experience. Next time weather seems to intrude on outdoor activities, look again and refocus on other forms of beauty!

Your source for information on the American War of Independence

Exploring the Past in an Age of Technology

Past in the Present

Nature and The Human Spirit

nature has no boss

A Teacher's Summer at Fort Ticonderoga

The Whole Truth and Nothing But the Truth